OK, that took a bit shorter than expected...

Found a set of 1989 US spec car documents on eBay, including a manual for the weird & wonderful US-style moving safety belts AND the obscure "total driving experience" cassette. I already had the cassette's casing, can't wait to hear what's on the tape! 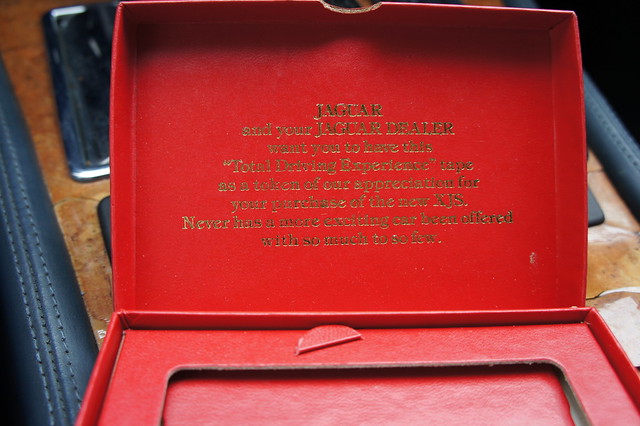 An update from the Workshop of Wonders yesterday: mechanical work on the XJ-S is done!
The aftermarket headlamps were a @#$%^& to work on, but that was about the only drawback Raymond encountered.

Someone in Japan has taken care of it rather well: part of the US-spec exhaust line has already been replaced by more performant tubing according to Raymond!

The last detail in the way of a fresh MOT is the ABS light: it refuses to come on/go off when starting. The ABS system has been tested on an empty road and activates as it should under hard braking with no pulling or brake shudder. There's always one last Gremlin...

As Naki said, there are always one or two 'ghosts in the machine' hanging around every Jaguar and refusing to go away!.

Some of the later US spec XJS Jaguars had four 'pre-cats' - one in each engine pipe - as well as the catalytic converters in the usual position either side of the transmission, and it seems quite common to fit Euro (or custom) downpipes and a more efficient single catalytic converter each side in the usual spot. I'm sure that by now you have found the section in Allan Scott's book on the tests they did for Jaguar and have your own modifications all mapped out

I spent last evening with the XJ-S repair operation manual and a G&T or two, and have the issue narrowed down to:
- faulty bulb/wiring: relatively quick & easy to test & rectify;
- no output signal from ABS module to warning light, which would be a faulty module. Not the end of the world, used units are around 50 quid...

Starbuck wrote:Some of the later US spec XJS Jaguars had four 'pre-cats' - one in each engine pipe - as well as the catalytic converters in the usual position either side of the transmission

If I understood Raymond correctly it's the cats along the transmission that have disappeared.
Will have a closer look post-MOT (emission values were absolutely fine, no worry for now!) to see what has already been replaced/upgraded and what could go on the list for further 'rectification'.

Starbuck wrote:...the section in Allan Scott's book on the tests they did for Jaguar and have your own modifications all mapped out...

Am roughly half-way the book now: thanks once again for the tip! It's an enjoyable read! And not just for the XJ-S afficionado: there's more than the occasional reference of TWR's racing experience flowing back into AJ6 development!

I'll make up my mind after the car is back from the bodyshop: make this the basis for a long-term mod & upgrade project, or sell it and start the hunt for a 6.0 XJR-S?

Not just for the performance goodies TWR used on them, the tuning potential of the larger engines is also - as you know - even better than the 5.3s, tempting... On the other hand: what is the chance of finding another shell this solid with comparable mileage?

Good to hear that work is progressing quickly, but I was not in doubt that would happen. I have done more or less nothing to mine since I bought it except from of course doing a few thousand miles and smiles

I do have a few parts coming in though, but I have been bloody busy rebuild our house, and I'm not finished yet. I just managed to have the concrete flooring poured and windows fitted before take off to Dunkeld, so it's time for finishing...

I do not see the dilemma with this XJ-S and XJS-R 6.0. The obvious solution is just to have both. The old design is nicer in my view, so I would not allow myself just to own one facelift XJS.
BR Leo Jensen - Denmark

leo_denmark wrote:The obvious solution is just to have both. The old design is nicer in my view.

I'm not sure whether I agree with the first, but certainly do with the second!

Hmmmmm... Pre-facelift XJ-S shell with XJR6.0 mechanicals and an upgrade or two?
Will be a huuuuuuuge project, but the result would we awesome!

leo_denmark wrote:The obvious solution is just to have both. The old design is nicer in my view.

I'm not sure whether I agree with the first, but certainly do with the second!

Hmmmmm... Pre-facelift XJ-S shell with XJR6.0 mechanicals and an upgrade or two?
Will be a huuuuuuuge project, but the result would we awesome!

katar83 wrote:From what I've read over years the Pre-HE v12 with an upgrade or two would definitely be more fun

That depends. Simple exhaust and intake mods on the HE will actually make more power than the same mods on the pre-HE engines - mostly because the HE runs such a high compression ratio and much more efficient fuelling and ignition. The most powerful production version of the V12 (until the first 6.0s) was actually the rare 'Bosch flat-head' V12 of 1980 - it ran a 10:1 compression ratio and essentially the same injection and ignition system as the HE, but wasn't 'strangled' to the extent the later HEs were as they had to meet increasingly stringent emissions requirements.

The 'flat-head' V12 is only really the better engine if you want to get up into racing horsepower figures because its valves aren't shrouded in the way the HE engines valves are. This only adversely affects the engine at extremely high gas flow speeds and volume though, far beyond that needed for a road car. The head engineer of the TWR XJS racing program and his team proved this when asked to look at ways of improving the power output of the V12 HE. With very basic exhaust and intake mods on the HE they produced some truly staggering increases without any changes to the internals, the intake manifolds or changes to the throttle bodies. The downside to the HE as a performance engine is that it will actually use more fuel than the flat-head V12 when driven hard - it is only more economical at light throttle (same goes for the 6.0).

There are plenty of early cars running around with modified 6.0 engines, it is quite a common conversion. We haven't felt the need to go to a bigger capacity though because our 5.3 HE with the simple engine mods it has, a five speed manual transmission and the XJ81 differential ratio in it, has incredible trouble getting that power to the ground via 245 tyres even on hot days. Once the exhaust and intakes are sorted as per Allan Scott's tests the V12 HE engine is a different beast entirely, particularly with a manual transmission (you have to go manual Pim - you'll be glad you did!).

If it were my money and my choice I would go with the car you have, open up the air cleaner intakes and the exhaust and get AJ6 engineering in the UK to reprogram an ECU for you, then throw in a Getrag manual transmission conversion from the UK - that's all you need. You won't believe you are driving the same car. If you run a 3.54 or 3.58 differential ratio the car will still cruise very nicely (and economically) on the highway because the overall ratio is about the same as an XJ81 with the overdrive top gear ratio. At 110kph our car is turning over at 2450rpm and returns around 26mpg on a long trip (more if it is a really flat trip!) because the intake and exhaust mods also make the car more economical too.

Interesting that the catalytic converters either side of the transmission have been removed on your car. The 'pre-cats' (if they are even fitted) are the bigger problem because they melt and block the exhaust just after the manifolds! We have 2.5" metallic core 200CPI cats on our car (required by law) but they provide little, if any, restriction because of the efficiency of the rest of the exhaust with those big straight through mufflers and large bore engine pipes.

I will be very interested to get your first driving impressions of the car as she is.