And to think there are many Jag owners who simply would not entertain the thought of a manual box on a big Jag.
Legend has it, Jag thought there was such little demand for a manual, that it was dropped from
The options list? Or was it they didn't want to spend to get the proper hardware in.

naki_k wrote:Legend has it, Jag thought there was such little demand for a manual, that it was dropped from
The options list? Or was it they didn't want to spend to get the proper hardware in.

A little of both from what I have read. The only production manual gearbox available to Jaguar at the time of the XJS launch was the four speed Jaguar 'all synchro' unit, and this couldn't be fitted with the overdrive on the V12 because the strongest overdrive unit wasn't strong enough. A five speed had been developed in house apparently but it was deemed too expensive to put into production. The all synchro box is a reasonably notchy unit (we had one in our XJC), but pleasant enough if you take your time. It isn't a good match to the XJS though when you consider the GTs the XJS was competing against (Ferrari 400i etc) had much more modern five speed manuals as options to their automatics.

Newer five speed units like the Getrag 290 and the Toyota W and R series boxes are much nicer to use and bring out the very best in the V12 in the XJS. Not only can you run a 3.54 or 3.58 diff and still cruise comfortably on the highway, the acceleration and throttle control is in a different league. The XJS is too big and heavy for really tight going, but as a 'point and squirt' between corners the manual is unbeatable. Every XJS owner I have spoken to that has put a five speed in their car says it makes it the car Jaguar should always have offered. The 6.0 with the GM4L80E is a good combination too, and of course there are also options for fitting the 'Turbo 700'/GM4L60E series transmissions to the 5.3 V12 for people who want a more modern auto instead.

Incidentally the Getrag units used by TWR for the race cars were a special sand cast unit with wider gears built specifically for the racing program. TWR did ultimately offer the Getrag 290 as a somewhat expensive (and rarely selected it seems) option on their XJS road cars.

Which is also when the XJ-S will be delivered...

Mr. Car Transporter was early: 9:30 and the car was in my hands again!
A proper truck they sent, too: it took a bit of thinking to decide where to offload the 18-meter truck & trailer combo. 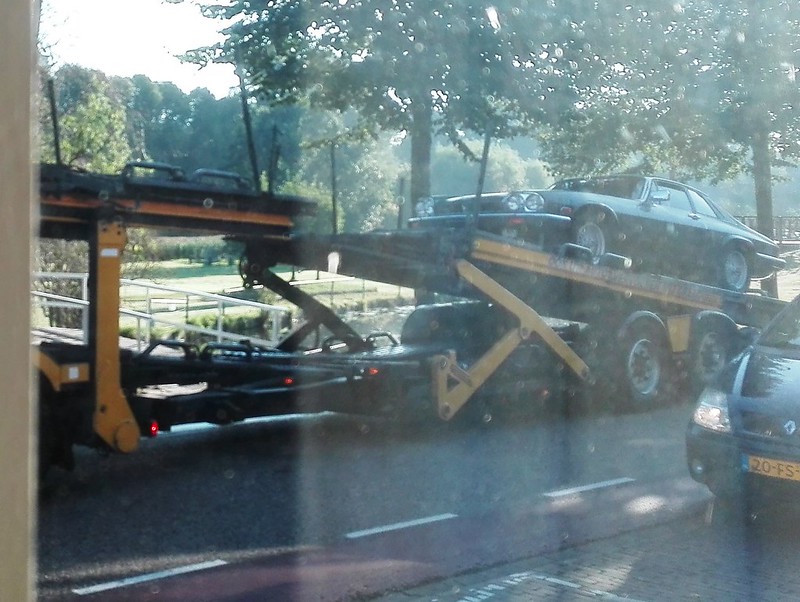 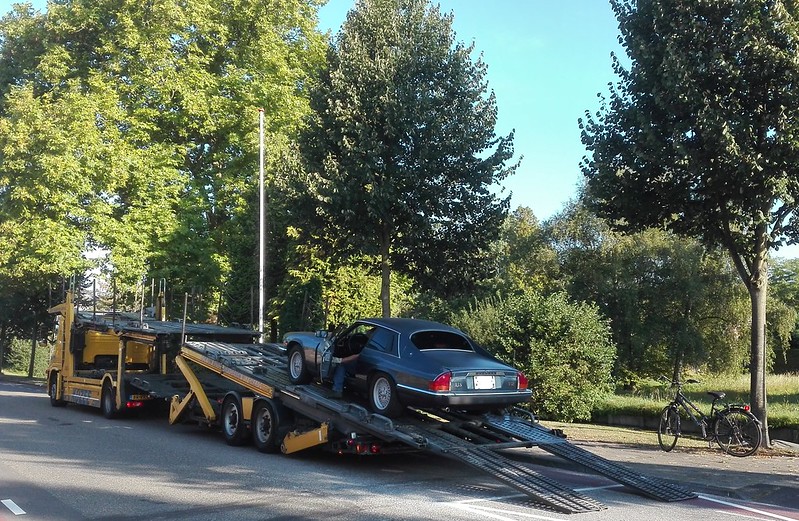 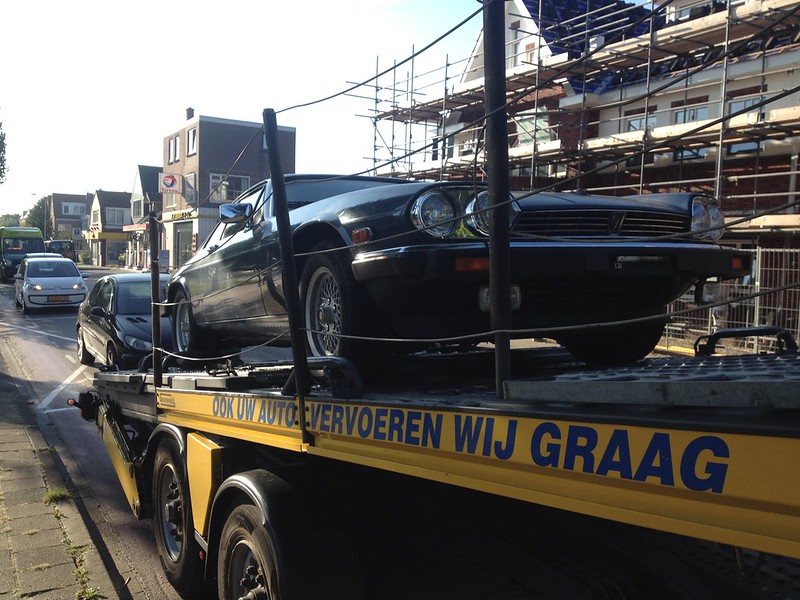 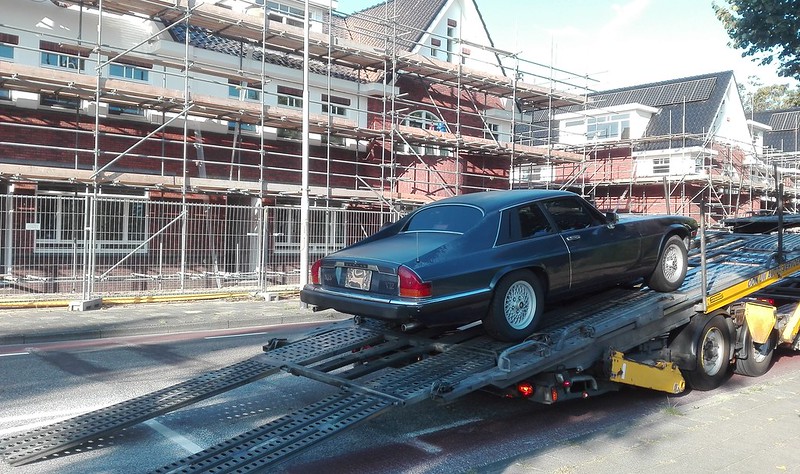 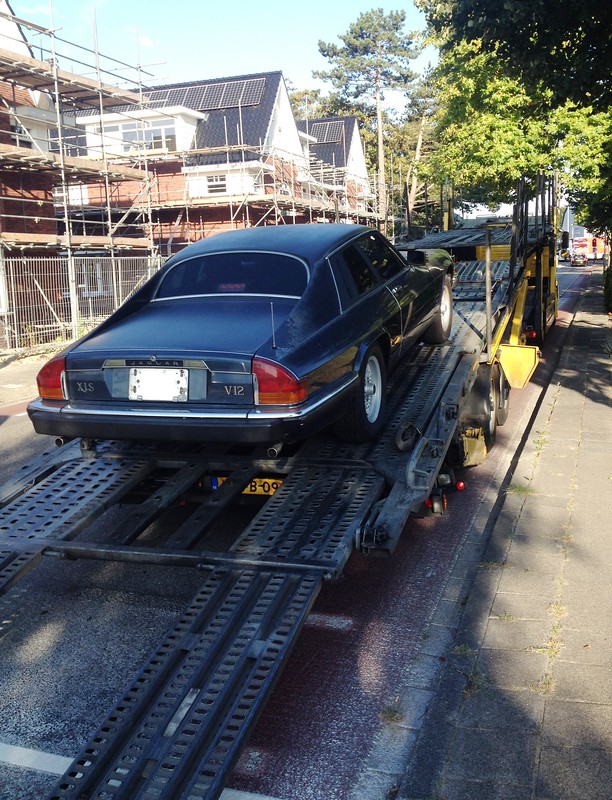 We parked it off the road next to Sovver for a while: my first opportunity to inspect the car at leisure in broad daylight... 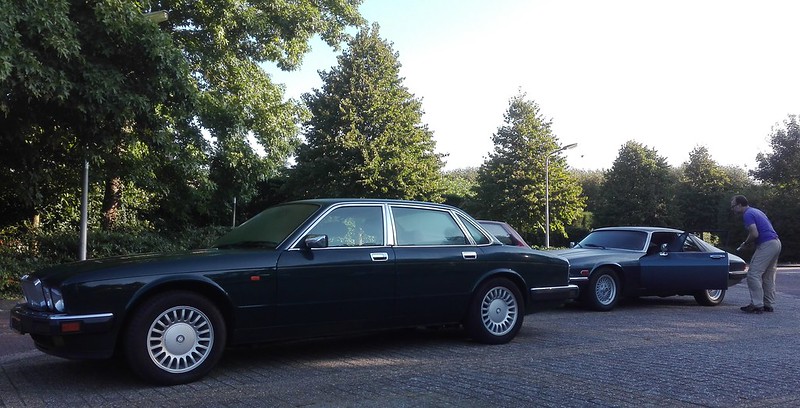 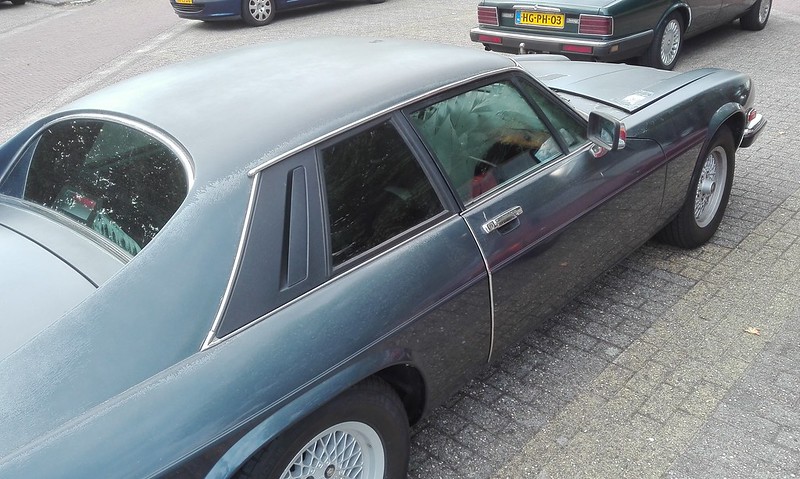 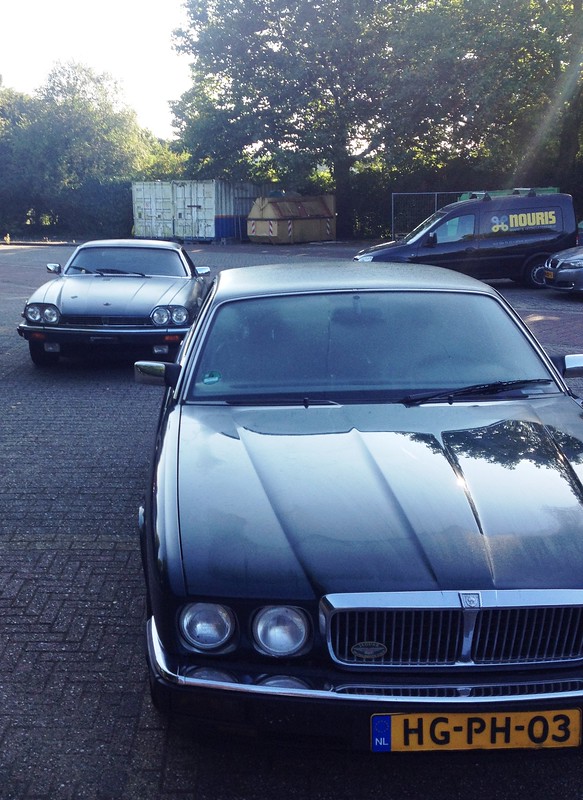 I found souvenirs of its Japanese life all over the car: a tax sticker, I guess? 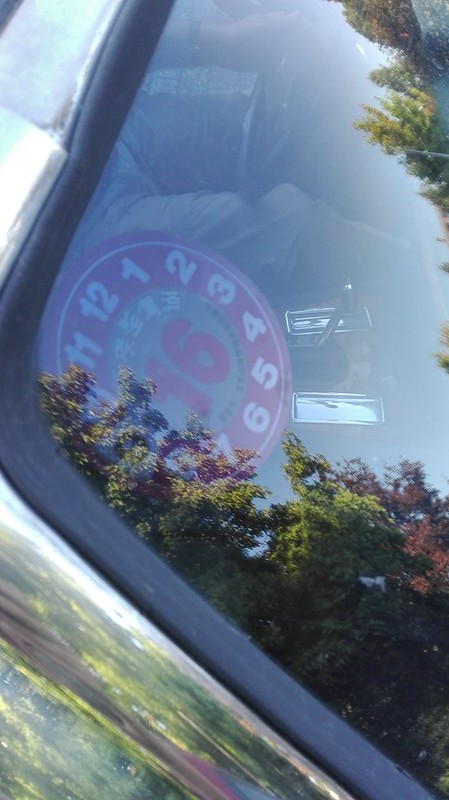 And inside the fuel filler door: 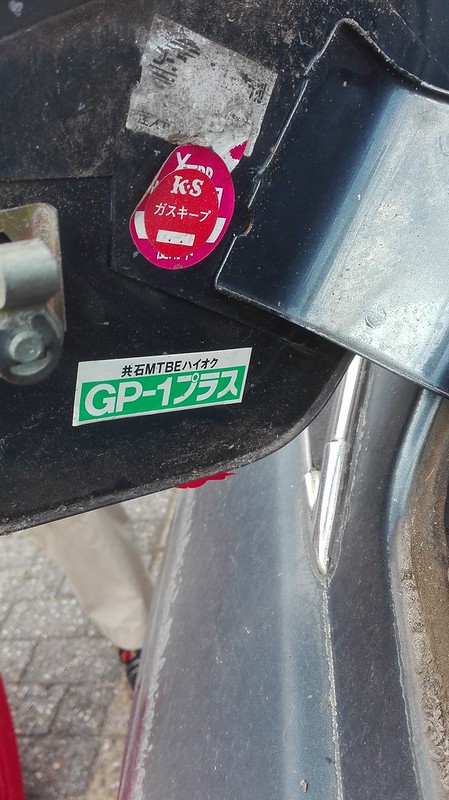 I found one more - tiny, <1/3 inch diameter - rust bubble, which will be easily tackled with the rear windscreen out.
The respray requires that anyway, so nothing to worry about. I found several needles in the carpet, silent witnesses of a desperate - and failed! - attempt to keep the headlining up...

The alloys with fresh Pirellis are remarkably clean, and require nothing more than cleaning: 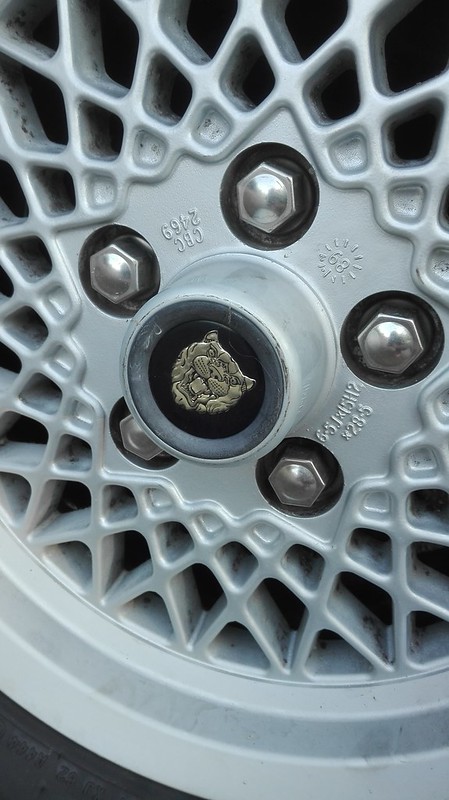 The vanished clearcoat is the biggest cosmetic issue, and makes the car look like a wreck to the uninitiated.
Pics look worse than reality though, recent rain covered the car in a thin coat of Sahara sand... 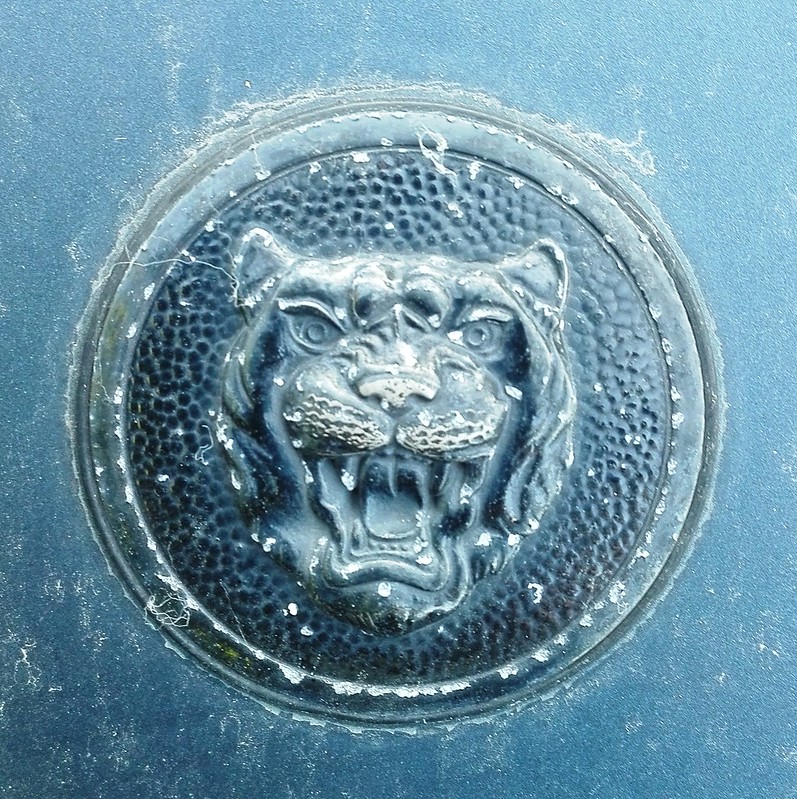 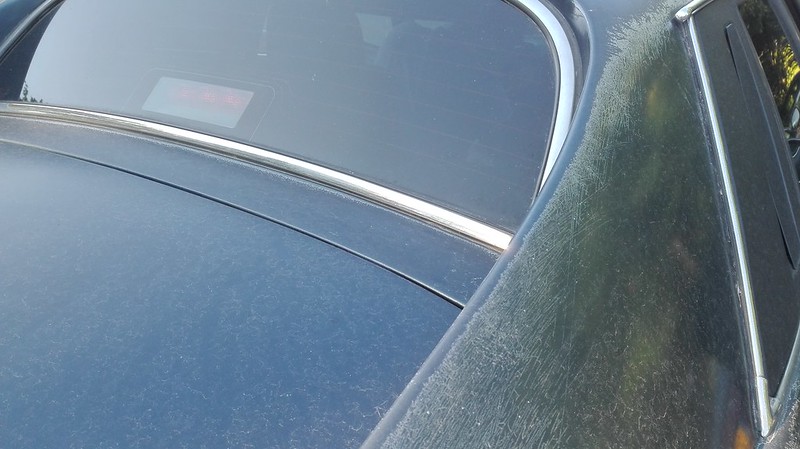 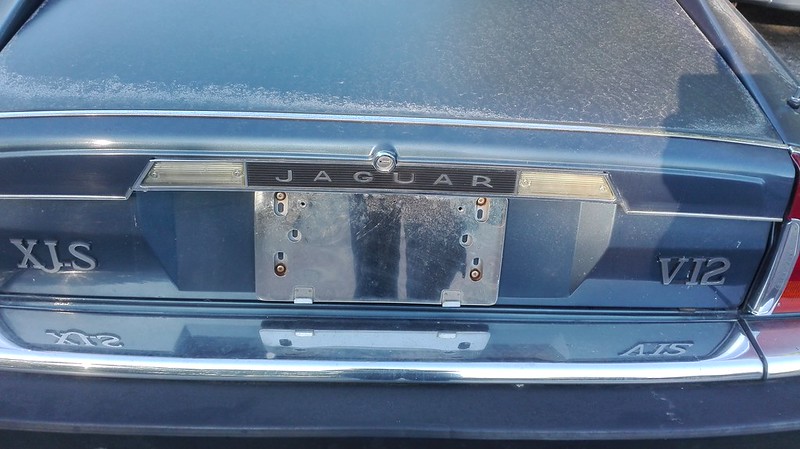 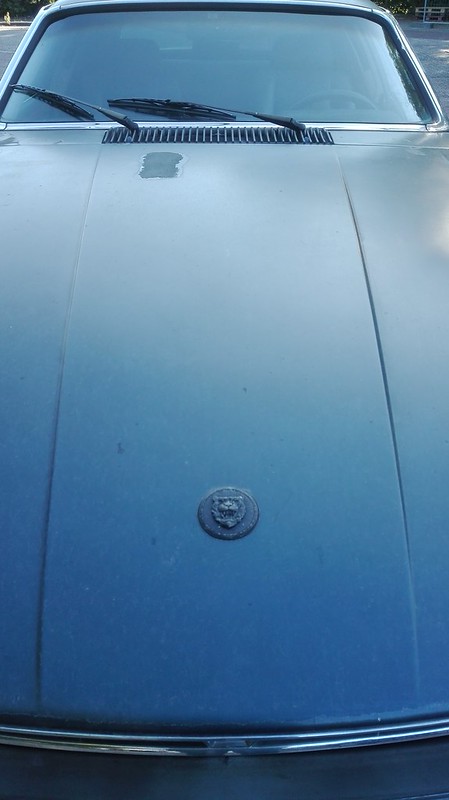 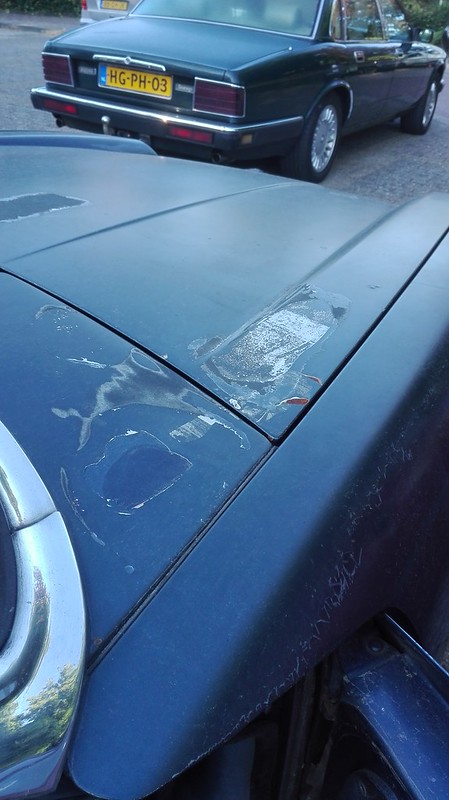 Best view - for now - is the front: the four shiny headlamps make quite a difference... 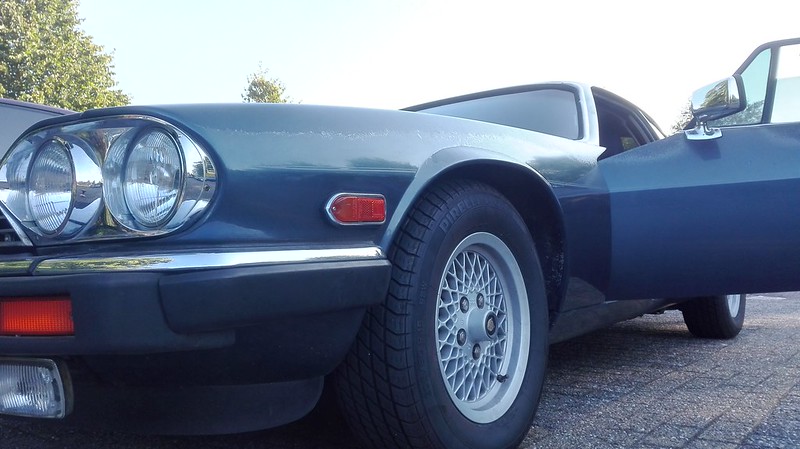 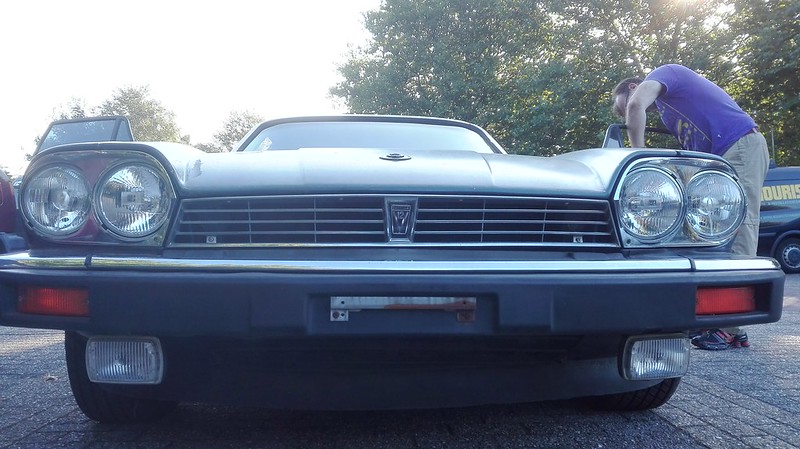 The engine bay is remarkably clean, and is another proof of the low mileage of the car. Engine bay pics will follow after I replace the gas struts (new parts waiting in ye olde shed), no fun trying to take pics using your own head as a bonnet strut!

There's no more fuel smell in the boot, that must've been the cold start in the seaport then... BTW: that's no excuse NOT to replace the fuel lines, Starbuck!

I made a small list of parts I want/need to replace, nothing too shocking so far. Do sunvisor clips sound familiar??

The heel pad has come loose from the driver's carpet, looks like an easy fix, and the plastic top end of the oil dipstick is missing, another easy replacement.

Today's effort was limited to 10 liters of petrol and removal of that !@#$%^&* window film before it was time to move the big cat to its new home. 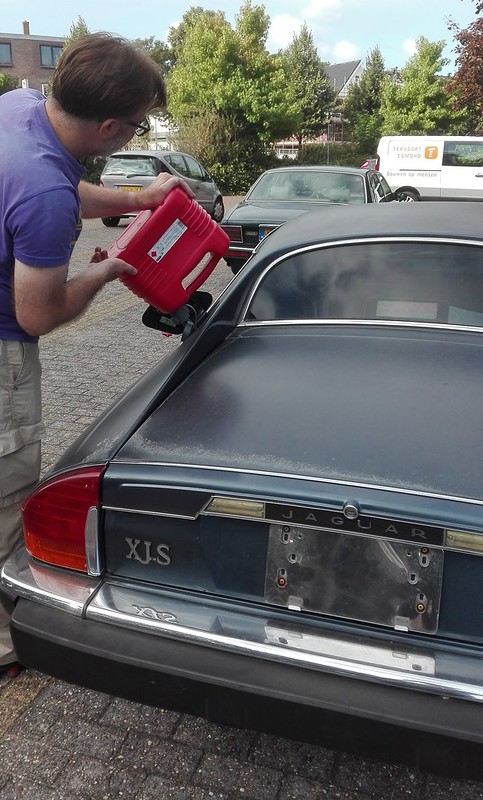 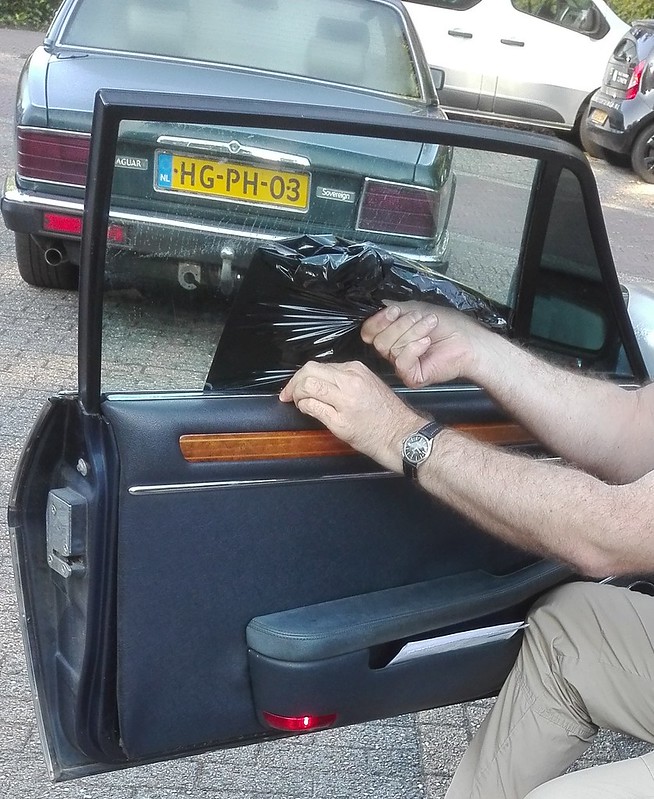 All is well for now, safely stored in its own lockup: 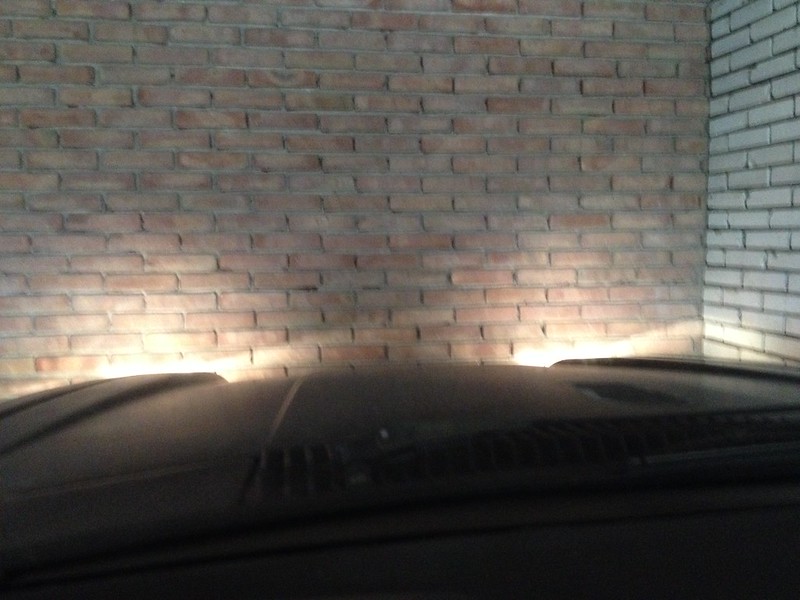 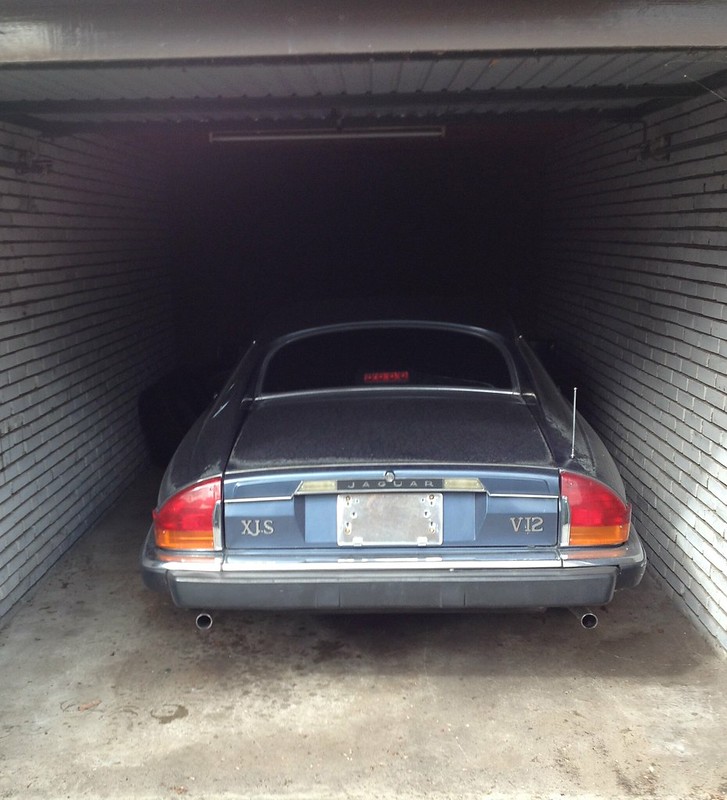 Now you have the XJS home you can start the fun parts of ownership, including doing a rolling restoration of all those little things that need doing and you can do yourself before she heads off for a respray. Small rust bubbles around the front and rear screens are common on the XJS so no surprise you found one. 'Cate's Cat' had a matching pair either side of the bottom of the rear screen when we bought her. The leather in the XJS seems to respond particularly well to treatment and the later seats are a good combination of comfort and location. Check the door trims and rear side trims carefully because many XJS have full leather trim and this will need treating too if that is the case.

On the road you will find an XJS feels very different to the XJ40 to drive. They have such a short wheelbase and you sit so close to the rear axle they give a very strong impression of tagging along at the back of that long nose everywhere you go, particularly in tighter corners like roundabouts. It takes a little getting used to.

I'll look forward to seeing how she progresses.

Exciting stuff.
is it road legal yet? no plates?

i can just imagine the curtain twitching neighbours, "oh there he is again with another yet another fancy car......

pimgmx wrote:A proper truck they sent, too: it took a bit of thinking to decide where to offload the 18-meter truck & trailer combo.

The road you live at is very unsuitable for a performance like that! I remember it when we lived in Nieuw-Vennep. Better get out of the way …

Congratulations Pim!! It is such an impressive moment to get a large and great present like this delivered to your door!

Now I looked through the photos it becomes clear to me that you have a talent to source gems that look like crap on first and second look (paint!! leather, veneer, black window films …) but are truly interesting on third look! Congratulations! And great you found a 'garagebox', that's already half of what we call monument conservation!

Of course I know the feeling of trying to find interesting "large and great presents" on the internet although one (I) should spend time to more urgent matters … sourced an Insignia in Germany, kept looking at it, questions not being answered, it has disappeared now … next present: a four-manual organ console with manual couplers ('manual gearbox') and electric stop action in seventies style … stop it!

Starbuck wrote:...doing a rolling restoration of all those little things that need doing...

License plate lights, sunvisor clips, bonnet gas struts will be done over the next couple of days.
Small and relatively unimportant jobs (well, WORKING bonnet struts would be nice...), but giving instant satisfaction. A nice and welcome contrast with my day job!
Will still have to fight my fight with the ABS warning light, but with all the car's mechanicals AND the bodyshell in good shape that is a relatively small barrier to overcome.

I've sourced new radius arms with ARB lugs, now need to decide whether I want them pre-bushed or do that myself.
We decided to do it the 'proper way' and use correct parts, rather than Raymond welding lugs onto the existing arms.

No, still needs to go through all the red tape.
Should be easy-ish, but will take time.

naki_k wrote:"oh there he is again with yet another fancy car."

The car was driven off the megatrailer in front of the village service station. Its owner: "Yet another Jag, Pim? Looks way better than that rusty XJR! And what happened to that bright green car, how's that doing?"
Still not sure whether I'm seen as the local car hero or as a village idiot!

Rensdd6 wrote:...to source gems that look like crap on first and second look...

That's what we were also told when we bought our house: most people thought we were insane buying something that needed so much work.
Back to the XJ-S: it's an 'honest' car: original paint, no welding done, no engine bay bodges. I've seen repainted US imports that only 'work' as 10-yard cars: they look great from that distance, but don't try to take a closer look...
And in this particular case yes, you need to be able (and willing!) to 'see through' the poor thing's cosmetics, it certainly has seen better days!

I consider drooping headlining, broken plastic, flaky veneer and weathered paint features of an original car, rather than weaknesses.

They indicate the car hasn't been messed with, and give me the -rare- opportunity to get a car done to my quality standards within a reasonable budget. Still a shame it needs a respray, though, both from a cost and originality perspective.