It seems like the xj is vibrating more and more on idle. I guess the engine mounts had its best time. is there an how to guide somewhere online or has anyone some important tips n tricks?

Just to be clear: are you sure it's engine vibration caused by the mounts, rather than irregular/rough idle?
With the front side of the car lifted up, you should be able to see the mounts with a bit of effort. You can then use a narrow breaker bar to test the mounts for play.

The recipe:
- lift the car (at least its front side)
- support the engine, either with jack stands underneath the sump or with a support bar on top of it, across the engine bay
- remove wheels & wheel arch liners
- locate engine dampers (see pics below for guidance)
- soak engine mount fasteners: both the top nut connecting the damper to the engine and the bolts that connect the damper bracket to the subframe. Use proper penetrating oil! WD40 may do the job but is not as good as dedicated stuff.
- remove nuts & bolts (a short ratchet spanner AND a ton of patience are your weapons of choice)
- wiggle the old damper & bracket out
- undo lower bolt to remove damper from its bracket
- clean up all fasteners (I either replace nuts & bolts or clean their thread with a tap & die), add a bit of copper grease and put it all back together again.

Some pictures added below, note that I went for the 'DIY route' and supported the engine from underneath.
That made the most sense in my case, 'cause I wanted to have the full subframe out anyway.
You may want to go for support from the top instead, which gives more working space down below...
Those engine support bars are quite affordable (<100EUR), and can often be rented as well.
You could've borrowed mine if you lived closer by! 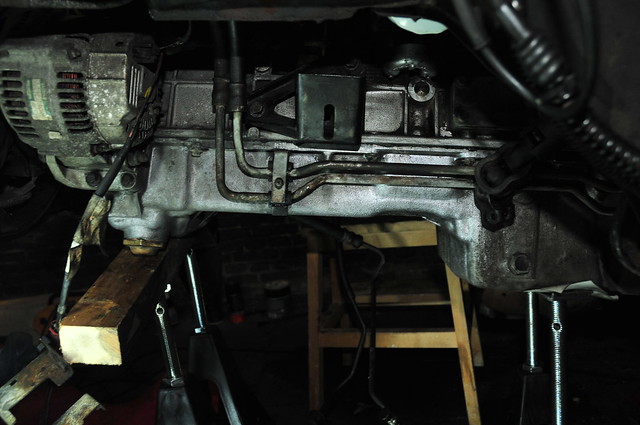 Supporting the engine.
The black rectangle with the vertical slot above the middle of the picture is the engine-side damper bracket.
You need to loosen the top damper bolt that sits behind it... 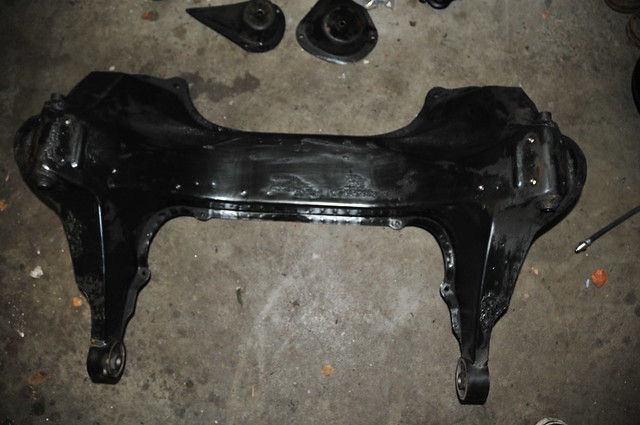 Subframe picture.
The two parts in the top of the picture are the subframe-side damper mounts.
They need to come off to access the lower damper nut. 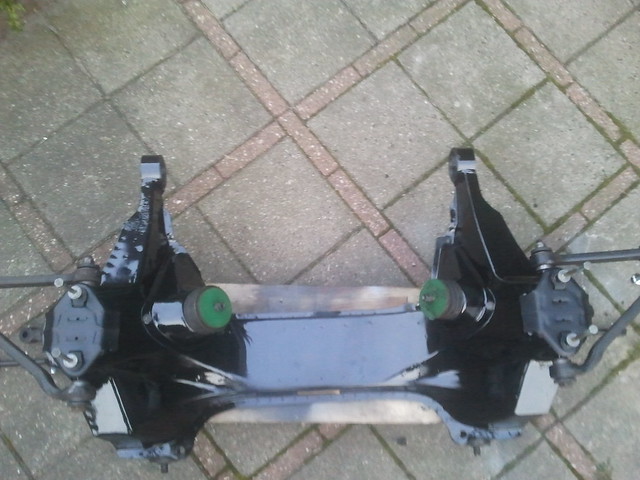 Post-restoration subframe
The parts with the green nylon(?) spacer on top are the engine dampers. 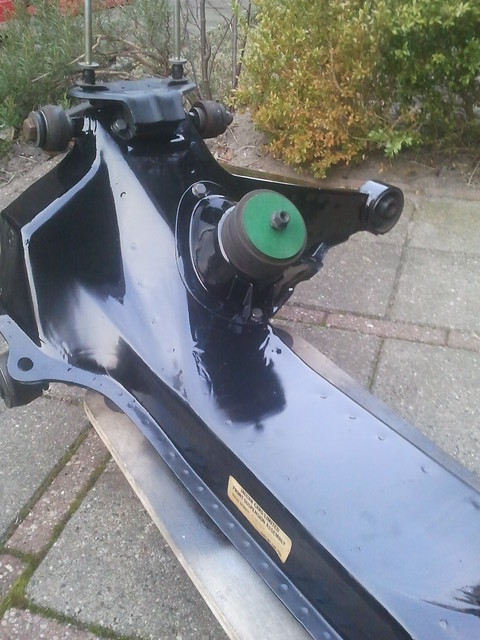 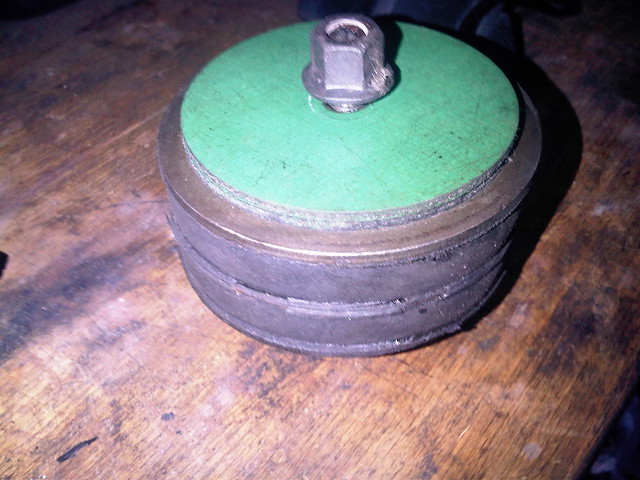 Checked these out and they look in nice overall condition, As you mentioned I looked about the idle running, and indeed, it is not always it has the vibrations. It is the fuel fail 26 I get now.

I already checked the forum but there seems to be not that much info about this fail.

I have some little oil sweating at the inlet collector near cylinder 5 and my exhaust has a ticking sound that increases with the rpm's. I got underneath it, but looks like there are no holes or leaking seals at the exaust.

Here's some useful information from the JL site regarding FF26 which to me suggests misfiring which would make the engine less stable ,

Fuel fail 26 is . As the engine gets partly warmed up, it stumbles and sets the code. The code will clear when the trouble does, on the next restart.

Possible faults for a FF26 are :

Best to start with the ignition system : If the wires, cap, rotor are old, replace them, along with spark plugs.

The catalytic converters may eventually melt plugging the exhaust if the car is ran with the FF alarm on, so don't ignore it just because the engine runs ok.

OK, that'll be an easier job (though harder to diagnose!) than new engine mounts...
And just thinking out loud: those engine dampers must be the ONLY rubbers Jaguar used that don't perish that easily?

There's a couple of easy & affordable steps you can take, based on the checklist Derek shared:
- replace the fuel filter and O-rings (costs only a few EUR), there's a good chance it hasn't been changed for ages!
- check the intake manifold for leaks by letting the engine idle and then gently spraying 'start spray' around the manifold. A change in rpm after spraying indicates a vacuum leak. Either retighten loose bolts/hose clamps or replace gasket(s) to fix the leak.
- recheck the spark plugs: are they tight enough (25-ish N/m torque) and is there no oil in the spark plug apertures? The latter suggests a leaking cam cover gasket, quite common on AJ6 engines.
- ignition components (as per Derek's suggestion): check distributor cap & rotor arm for wear and replace if needed. A rotor arm is only a few EUR, an aftermarket cap 10-15 iirc
- clean the connectors for the MAF sensor or replace yours with a 'known good' part
the daily: 01 S8 http://bit.ly/2kIwP4m
the eyecatcher: 93 Insignia http://bit.ly/1iGrmsU
the GT: 89 XJS http://bit.ly/1WQGpC5
the diva: 88 Biturbo SI https://bit.ly/3dzdvAL
the ex: 93 3.2 http://bit.ly/14GTNrq
Top

a day further and some updates:

the air filter is new since a week, also the spark plug and camshaft seals.

changed the fuel filter, indeed hasn't been changed for a long time I guess. there came out some brown fluid.
removed the battery, re installed it, and did around 25km test run. the fuel fail 26 error is gone for now, and the check engine light is out.

now, It can be me, but sometimes at idle I have the feeling the engine is still running rough. the rpm needle is around 700rpm. sometimes when i push the throttle pedal, the needle stays a few seconds at aroung 900rpm and then slowly goes down to 700 again.

i also tried to measure out the oxygen sensor. this is a 3 cable on. 1 12v feed and 2 sensor wires. It looks like this is okay, but is quite hard to measure out.


I will clean out the fuel injectors this week and the maf sensor. I also ordered an compression tester, as my exhaust makes a ticking noise right behind the right feet area. I read this can be because of a burnt exhaust valve, so I got a bit scared

and a fuel pressure tester is also on his way.
Top

Just did the compression test.
All cilinders are 7.5kg/cm2 except cylinder 5 and 6. Those are 9kg/cm2

What can cause this? Faulty injectors? Will clean them out this evening
Top

cedriccools wrote:Just did the compression test.
All cilinders are 7.5kg/cm2 except cylinder 5 and 6. Those are 9kg/cm2

What can cause this? Faulty injectors? Will clean them out this evening

Those compression readings equate to 106.6 psi and 128 psi , Haynes manual suggests readings should be between 150 and 160 psi with no more than 10 psi difference between cylinders

cedriccools wrote:Just did the compression test.
All cilinders are 7.5kg/cm2 except cylinder 5 and 6. Those are 9kg/cm2

What can cause this? Faulty injectors? Will clean them out this evening

Those compression readings equate to 106.6 psi and 128 psi , Haynes manual suggests readings should be between 150 and 160 psi with no more than 10 psi difference between cylinders

today I will have a new one.

now, what makes it that some sparkplugs run rich and some run lean? I cleaned the injectors yesterday, without result
Top

Just thinking about the low rpm...

Does it only have the issues once warm?
And
Does the car struggle to run sometimes when you come to a stop (again only when warm)? Perhaps even cut out when you stop?

If so, it may be the coolant temperature sensor. It's a common fail and I've had mine go twice, when it happens the car runs like a dog, tries to drop the revs too low and mine threw a couple of VCM codes (can't remember which now though

Might be wrong but it's one of the cheaper bits to replace if the symptoms match.
Regards, Carl

Users browsing this forum: No registered users and 1 guest