After reading about the damage that can be done with a dodgy starter motor I decided to replace mine. I went for brand new as I didn't want to have to do this job twice. Glad I won't have to as it was a pig of a job.

Took me around 5 hours. I read quite a few posts on the subject with different people sharing their own ways on how to tackle it.

I went in from the top and removed various cable ties to move stuff out of the way. The wiper motor came out fairly easy - I used a piece of metal cable to thread through the hole in the clip and pull towards me until it shifted.

Then came a few minutes of head scratching and trying to work out how to crack that bolt....I came up with this tool which worked a treat! 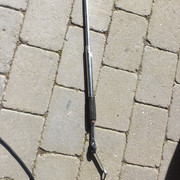 It's basically a 13mm spanner connected to a 16mm spanner using the old way of interlinking then I cut the end off the 16mm so it would fit into my extendable wheel brace.

Once I cracked the bolt and unscrew it I moved underneath, undid the lower bolt then removed the starter motor and unscrew the cables attached.

It took a while, was messy and involved destroying some tools but it was worth it and now I have a car that starts instantly for £74!

This is a side by side comparison - not sure if it is worn or not but it sounded horrible when trying to start and sounded like the bendix was staying connected and making a grinding noise after starting. Now it starts first turn of the key and doesnt sound like an old banger. 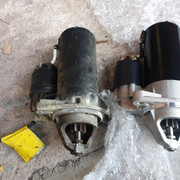 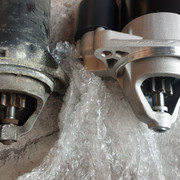 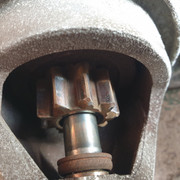 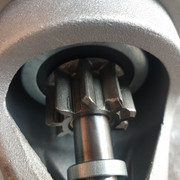 So all in all a mission of a job but made such a difference. There is no issue going in from the top but it does take a bit of time slowly unscrewing it with what space is available.
1992 Sovereign 3.2l
Top

You must be feeling pretty chuffed , i know i would if i'd done one successfully , i think these days you just have to try and do these jobs yourself as not many garages want to do this kind of work , and if they would have think of the money you've saved

Cheers, yeah I was well chuffed at the end. I can imagine why a garage would say no because it's not the most exciting job and very fiddly plus time consuming.

Feels so much better not being embarrassed about starting it around people because of the racket it made.

You get a sense of achievement when completing a job like this. I'd read loads of stuff on it and wondered what I'd do if I got halfway through and couldn't finish it. I've replaced an engine in a Laguna before by reading a Haynes manual. I guess you can do anything if you put your mind to it!
1992 Sovereign 3.2l
Top
Post Reply
3 posts • Page 1 of 1