pimgmx wrote:We decided to do it the 'proper way' and use correct parts, rather than Raymond welding lugs onto the existing arms.

Highly recommended as those arms aren't made from particularly heavy gauge steel - the correct arms aren't expensive anyway. Unless you are planning to install the bushes turned 90 degrees to sharpen the rear suspension a bit it is much easier to buy them with the bushes already fitted.

Be ready for a bitch-fight (guess of all people I can say that?) getting the bushes off their mounting posts on the body shell. The bolts generally come out quite easily but the inner sleeve of the bush is often 'welded' to the post. Sometimes the only way to get them off is cut away the rubber from around the outside of the inner sleeve and remove the arm, then carefully grind through one side of the inner sleeve with an angle grinder and get a suitable lever in between the two layers of steel and chisel them apart. Once off just clean everything up thoroughly and use anti-sieze when you refit the new arms.

Starbuck wrote:...inner sleeve of the bush is often 'welded' to the post...

That normally never happens on Jags! [/Pinocchio mode]
I had just the same with a few of the Sovereign's front suspension bushes, not the most pleasant surprises of that restore.

All I can do is cross my fingers and hope that the low mileage of the XJ-S will also be kind to me in this area...
I followed your advice and ordered a pair of pre-bushed radius arms, another nice little winter job added to the list!

Even with no other suspension modifications you will find installation of the rear bar makes the XJS a much nicer handler. It loses its 'safe' understeer that was designed to stop customers in certain markets suing Jaguar for their own driving shortcomings.

I personally think the Allan Scott book is a 'must' for every Jaguar fan, not just fans of the XJS. It was an almighty effort to get the XJS to such a competitive state and it did wonders for Jaguar's reputation to be involved in racing at that level and resulted in the offshoot TWR road car program. You will now have a very good idea of the sorts of modifications that are worth doing to the V12 too

Just updating the topic, albeit the news is minimal:
radius arms have arrived and found their place in ye olde parts shed... 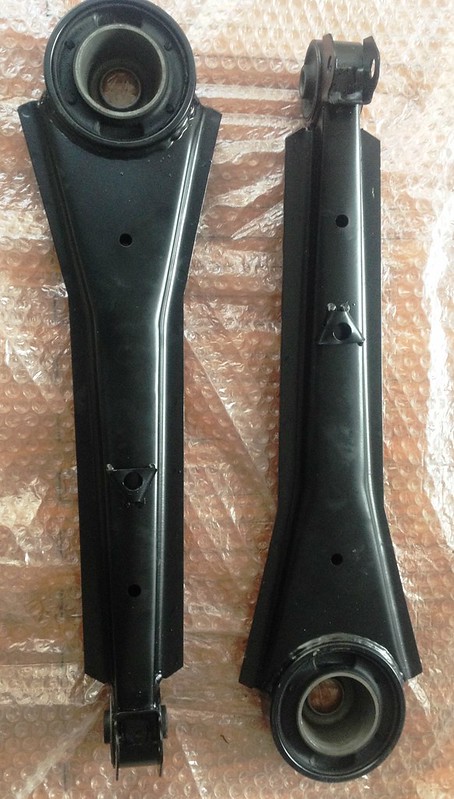 Won't be fitted any time soon, got a book to finish first!

Just updating the topic, albeit the news is minimal:
radius arms have arrived and found their place in ye olde parts shed...

Won't be fitted any time soon, got a book to finish first!

Are these triangular pieces threaded and welded on and supposed to hold rear anti roll bar ? Looks pretty flimsy to me, but it's probably similar design as mine...

I've finished the book, and it was great. According to Allan Scott TWR didn't use rear ARB on their XJ-S. Their cars looks well balanced on video, but racing and road use is far from the same thing.
BR Leo Jensen - Denmark

leo_denmark wrote:Are these triangular pieces threaded and welded on and supposed to hold rear anti roll bar ? Looks pretty flimsy to me

That was my first thought when I unwrapped them.
I'll probably go full anorak mode on the radius arms: strip the paint on/around the lugs, bring out the MIG to PROPERLY attach the lugs and finish with a coat of paint.

Can't disagree with that...

A big 'thank you' to Starbuck for spreading the Allan Scott gospel!
Several people including our resident XJ-S guru Starbuck recommended the rear ARB, I'll find out quick enough whether I like it or not.

The rear suspension of the TWR race cars bears little resemblance to the road cars. I had the privilege of poking around under the car that lives here in Melbourne when it was up on the hoist, and although the general layout is the same you would be lucky to find any standard parts. Brakes are 'free' on International Group A and the rear brakes are outboard (bearing in mind these are early 80s cars) and massive AP items, location of the suspension arms is very different, the arms are different, the hub carriers are fabricated items, etc etc.

What I liked the most about Allan Scott's book is that it covers Jaguar's racing program in broader terms than just restricting it to the XJS program. It was interesting to read about some of the politics involved in TWRs dealing with a company that had only recently escaped the 'clutches' of British Leyland and all that entailed. As an owner of an XJS and a 635CSi - the two 'natural enemies' in Grp A - it was also interesting to read about the 'cheats' that both sides used to stretch the regulations as far as they could stretch them without getting caught out! I think most Jaguar enthusiasts would get a lot from Allan Scott's book.

Most of the Pre HE XJS V12s had a rear roll bar (in fact all up to a point if I remember correctly), removing it to turn the car into a terminal understeerer at the limit was a nod to the litigious US market where any car that oversteered was considered 'dangerous'. I'm not sure how plowing headlong into an oncoming car is a better option in court than getting your tail clipped, but, there you go

I guess they figured most drivers should know enough to back off the throttle once understeer starts, but with the very light power steering on the standard car I'm not sure that most people would be able to detect it before it was too late.

With a standard V12 front bar and the addition of a rear bar you will find your XJS is a little more 'tail happy', but it will also feel much more stable before you get to the limit and will turn in to corners much more nicely (important with so much engine hanging out the front). Try to eventually track down a V12 'sport' front bar to go with the rear one if you can as this will make the car handle like the pre-HE cars did - removing the odd 'kneeling' on an front corner the HE has.

Starbuck wrote:...I had the privilege of poking around under the car that lives here in Melbourne when it was up on the hoist...

Thanks for the first-hand insight!

Another upgrade acquired: a used set of larger "AJ6 Engineering" air filter boxes & throttle bodies...
The car will be off to the bodyshop as early in the New Year as possible, time for some project progress with this one! 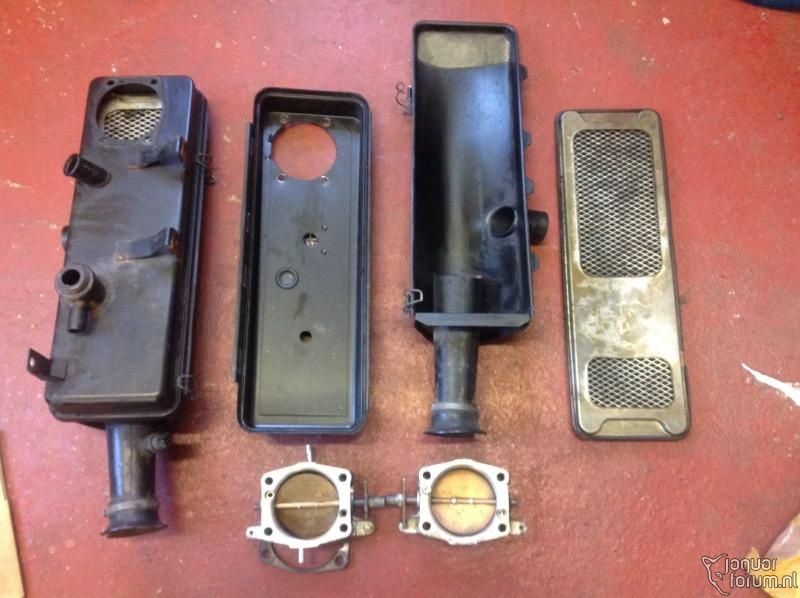